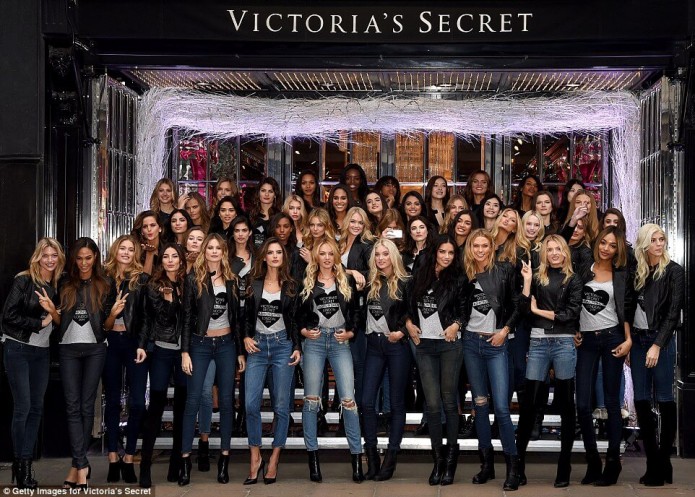 After the most coveted show in the world, the Angels transformed from their sexy lingerie into their nighttime gowns for the black and white themed after party in London, England on Dec 02 2014 at Earls Court Exhibition Centre. While this was happening, another Angel party took place at London’s newest celebrity hideout, Bonbonniere for the Victoria’s Secret Show London 2014 Together with Dunn was was British actress Ashley Madekwe, popular for her role as social climber Ashley Davenport on the ABC drama series Revenge. The luxurious nightclub only opened a couple of weeks ago, is already making waves in London’s A-listers circle – Tinie Tempah, Will.i.am and Nicole Scherzinger have all made appearances there.
The nightspot’s interiors are heavily influenced by the infamous Fabergé Egg, the same people behind The Armani Hotel. Bonbonniere is so posh, to the point they claim to serve the world’s most luxurious and exquisite cocktail, which comes in a Swarovski-encrusted Fabergé Egg replica and with a price tag of £35,000.

The expensive cocktail comprises a Jeroboam of Armand de Brignac champagne, two bottles of Imperial Collection Russian vodka, Luxardo maraschino cherry liqueur and a side of beluga caviar. And if this isn’t enough, this unique blend is served with a delicate diamond necklace.

Rumor has it that Paris Hilton will drop by in a few weeks and will treat herself to the cocktail when she parties at the club on her first visit to the British capital in five years.