The Box Club boasts one of the strangest night club experiences in all of London’s night life. This is hardly surprising though. After all, the club is based right in the heart of Soho. Be a part of The Box Guestlist through London Night Guide and save the best spots in the club.

The Box Club is deceiving. The exterior is nothing more than a wooden door. In fact, if you have ever been in Soho then it is likely you would have passed it by numerous times without so much as giving it a passing glance. Members of The Box Guestlist will be greeted by an incredibly unique club. Inside you will find two stages, each of them draped in some of the most exquisite of decorations. There are acts at midnight every Wednesday to Saturday, many of them very sexual in nature (think along the lines of strip shows here), however from time to time there are other cabaret acts out there, perhaps one of the most popular being the fire-stunt shows.

Do not expect a trip to the Box Club to be cheap. There is a £30 entrance fee and £2000 minimum spend on table bookings at The Box London. It is also remarkably difficult to get in (the guys on the door will pick and choose who they want to enter, seemingly on a whim). Once you inside you will be ordered out if you so much as take a photograph or even pick up your phone.

The Box Club is unique insofar as the fact that it is one of only a few nightclubs in London which does not have a guest list. There is no need for it to do either. There are people queuing around outside the club each and every day that is open. If you want to get in then it is important that you turn up early…and that you impress the door picker.

The Box Dress Code for the members of the Box guestlist is chic and sexy in heels for the ladies and smart casual with elegant shoes for the gentlemen. The club management reserves the right to refuse entry when requirements are not matched. 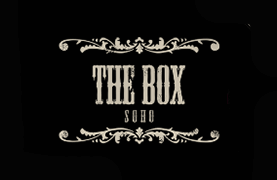