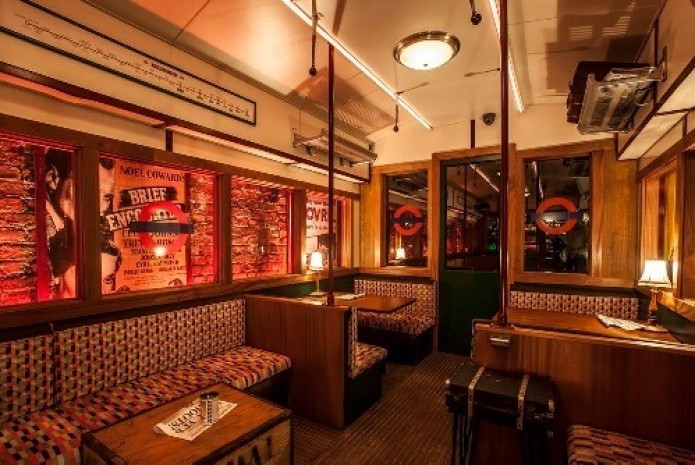 For seven years in London, it has been illegal to drink any kinds of alcohol on the tube. Cahoots Bar, a newly opened hostpot located in an old abandoned air raid shelter from World War Two, will let you enjoy your cocktails on your commute. Based in Carnaby Street, Cahoots has been designed to resemble a vintage Underground station and will transport guests back to the 1940s, in a bid to bring Soho’s illicit and nocturnal escapades from the era back to life.

The people behind the vintage bar also aimed to make the entrance as authentic as possible to the wooden escalators that would have been used in the stations. If the decor is not enough to inspire a visit, the extensive cocktail menu is an impressive eight pages long and vast amount on offer are priced £7-£9. Chose to indulge in Dig for Victory-style cocktails, drinks served in Thermos flasks, milk bottles, as well as new variations of old favourites. Alternatively the impressive Cahoots signature cocktail is the Tanqueray No.TEN Station Clock, which has a working face, and serves eight for £150.

When you arrive at the Soho location, you are greeted by staff who issue you with a ticket to board the underground tube carriage. They are dressed in character, with 1946 outfits, accents, nicknames with back stories as to how they came to work in the bar. Another interesting feature about the bar is the dimly-lit cosy air raid bunker seating booth, which is perfect for dates due to the snug proximity.