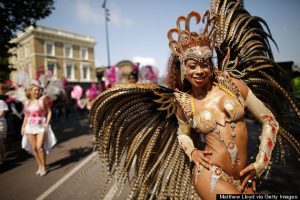 LONDON, ENGLAND – AUGUST 26: Performers parade past the judges position at the start of the Notting Hill Carnival on August 26, 2013 in London, England. More than one million people are expected to enjoy this year’s Notting Hill Carnival. It is the largest street festival in Europe and was first held in 1964 by the Afro-Caribbean community. Over the bank holiday weekend the streets come alive to steel bands, colourful floats and costumed performers as members of the public flood into the area to join in the celebrations. (Photo by Matthew Lloyd/Getty Images)